A town has turned into a hell as humans transformed into brutal monsters run amok. A high school student with a painful past and the inhabitants of the same building are inevitably caught up in a battle for life and death.

Synopsis of each episode

episode1
Cha Hyun-soo moves into an old high-rise house all by himself. Soon after, he witnesses a horrifying scene in the room of a resident who lives on the same floor.

episode2
The residents tie up Pyun Sang-wook, who was bitten by a monster, as an emergency alert is issued. Hyun-soo can’t abandon the family in great danger.

episode3
Hyun-soo, together with Yoon Ji-soo and Jeon Jae-hong, tries to take the children to a safe place. The children are trapped by the monster, but a savior appears in front of them.

episode 4
The people are told important information about the monster. The residents are divided on what to do with Hyun-soo, and at the suggestion of Lee Eun-hyuk, they take a vote.

episode5
Hyun-soo is given a dangerous mission and heads back upstairs to bring Han Doo-sik and the others back. Sang-wook tries to achieve his goal despite being badly injured.

episode 6
Ahn Soon-yeong is confronted by the monster she has been afraid of for so long. After leaving the building, Seo Yi-kyung heads to her fiancé’s workplace in search of answers…

episode7
Hyun-soo protects the inhabitants from the monster attack. With only a few drops of water and food left, Un-hyuk announces his plan to go outside to get supplies.

episode 8
Realizing that her options for survival are limited, Ji-soo takes a big gamble. Yi-kyung returns to the green home before it’s too late.

episode 9
The outlaws begin to take control of the building with weapons in hand. When the residents see their unreasonable behavior, they realize that humans can be more terrifying than monsters.

episode10
The residents ponder whether they should believe the military’s promise to transport them to a safe place. Meanwhile, Hyun-soo gets new information about his situation.

I saw the trailer for this zombie movie on Netflix and was curious, so I watched it and found it to be a really interesting drama!
It was so interesting that I watched all 10 episodes in one sitting! If you like The Walking Dead up to season 3, you’ll love this one!
It’s not completely a horror movie, but it has elements that make it worth watching!
The characters are also very appealing!
The characters were very appealing. This work seems to be based on a comic book, so there are a few cartoonish characters, but just like The Walking Dead, it’s not overdone and blends in well. It’s a good story for those who like to see things unfold as they should!

In this work, people become monsters of various different shapes.
It seems that the condition for mutation is “desire”. It seems that if you desire something strongly, it will be reflected in your body. There are no other conditions, so even if you are exposed to the monster’s bodily fluids or bitten, you will not mutate.

The trouble with this mutation is that it doesn’t immediately turn into a deformed monster, but it gradually becomes uncontrollable and mutates. There are exceptions to this rule, such as the main character Hyun-soo, who does not mutate and has the same regenerative abilities as the deformed monster.
After the first 15 days of symptoms, the disease is over, and you become a specially infected person like Hyun-soo.

Monsters are scary, strong, and fast!

The first episode is a horror story that pretends to be a monster panic story, but it’s actually a monster battle story!

The monsters left a deep impression on me! But I don’t know their names!
A humanoid monster that lost half its face and developed ears!
When this guy showed up, I was on the edge of my seat with a sizzling development. And this guy’s arm extension is too strong!

Meatball protein!
Protein! Protein!
He pushes you out of an apartment early on, but then reappears in a size like the Behemoth from Fallout 3! There was also a scene where he beat up the monster I mentioned above, and I was surprised that monsters fight each other too.

The one that appears in the first episode and lurks in a clay pipe near the apartment!
A monster that stretches out its tongue and sucks out human blood.
There are many good shocking scenes.

A spider-shaped monster.
They’re there pretty early on, but they don’t get knocked down, they just start wrapping themselves up in strings!
The flow of scenes where all the humans work together to trap them was hot!

Fast moving monsters!
What? Isn’t this the strongest? It moves so fast and hits you.
It’s legs are on fire. It’s probably a blind type, and it moves in response to sound. This one, like the spider type, was also a strong character that would come out but I couldn’t get into the flow of defeating it.

Guards!
The one with the face that attracts flies is awful, but this is the worst monster of all, the one that caused Jae Hong’s death! I liked Jae Hong a lot, it’s not fair to have a character with a sword, he’s so cool! I liked Jae Hong. I thought it was a mutation flag, but it turned out to be a death flag…
I was so shocked when he cut off his arm, it was the most shocking thing in this work. I wish he could have survived the mutation…

It’s a drama. The last two episodes go by in a blur!
In episode 9, a bandit-like group of people led by Shin Jung-seob rushes into the apartment to target the soldiers who have escaped.
This episode was quite a shocker! Auntie Soo-myung, who was trying her best to make it through the pass, died, and the story is going on with the possibility of everyone dying, so we’re on the edge of our seats.
But one of his friends, who is also a special infected person like Hyun-soo, kills Shin Jong-seob and saves Hyun-soo.

That’s the scariest part of the story! I know it’s a cliché, but a group of people with guns is scary! There’s also a monster who can help humans here.
In the next episode, he gets burned, but at first I thought it was Myungsuk, who was mutated to look like a baby, but it seems to be something else. The monster industry is also full of mysteries!

In the last episode, there is a rift between Hyun-soo and the infected over a flyer distributed by a helicopter that says they can go to a safe place if they hand over a special infected person.
In the meantime, one of the residents of the apartment building presses the buzzer that informs the military of his whereabouts without telling Soi Kyung.

When Sang-wook tries to carry Yuri out after she has an asthma attack, a specially infected man shoots her and attacks the other residents.
When Hyun-soo sees this, he stops him and enters the next stage of mutation.
His arm turns into a monster hunter’s Cerulegius and melts into his wrapping, and he dies. When he tries to attack the residents, his uncle, who has also mutated and can walk, stops him.
When Hyun-soo’s mutation stops and he wakes up, he has lost his memory.

The army surrounds the apartment building and Hyun-soo tries to surrender.
Eunchok tries to stop Hyun-soo and the other residents from leaving the basement.
When he escapes from the basement, he finds himself surrounded by the army. He is told that he hasn’t accomplished anything yet, so Soi Kyung takes the residents to the car and goes on a military mission alone.
When Hyun-soo wakes up, he finds himself in a car. Sang-wook is in the driver’s seat, but there are no burns.
END

I’m sure I’ll have more to say, but I’ll end here.
Sweet Home was an interesting work!

Here are my thoughts on other movies and foreign dramas.
映画・海外ドラマ一覧表 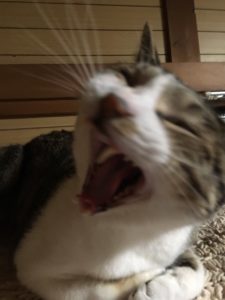